The Top 100 Photos of All Time! Part One 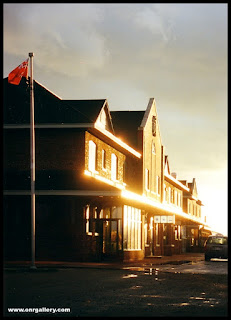 It was indeed a one in a million photo opportunity that just had to be captured. Cochrane had just gone through one of this year's fiercest thunder storms. With the town thorughly soaked from the downpour and the thick thunder clouds heading south, the setting sun breaks through to illuminate Cochrane Station to make it look almost "Cathedral-like" June 2002. 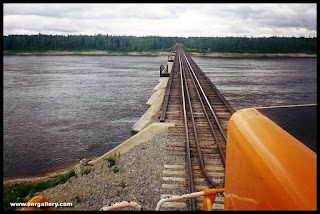 The Moose River bridge at Mile 142.5, Ontario Northland's longest span as seen from the cab of GP38-2 1806 pulling June 28, 2001's northbound Polar Bear Express. Truly a breathtaking sight. It's not the highest bridge I've ever seen, but as I mentioned, this thing's long. The fact that the train slows to a snail's pace while crossing gives everyone aboard an opportunity to check out the spectacular view.

Photo Number 98: The Journey Marches On. 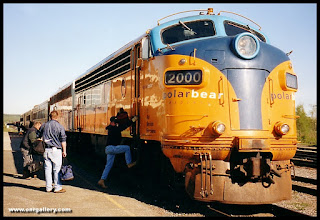 The southbound Northlander (422) rolls in to Englehart, Ontario on the Ramore Subdivision on a sunny morning in May 2002 lead by FP7au 2000. Englehart is the changing point for the Head End Crew and the Train number changes from 422 to 222 for the remainder of the trip to North Bay, Ontario where CN Crews will take over the operation of the Northlander to Toronto. 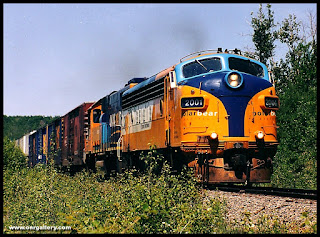 It's a sunny and warm Thursday afternoon in July 2002 as we meet up with FP7AU 2001 and GP38-2 1804 leading southbound 622 (The Little Bear) at Mile 4.5 of the Island Falls Subdivision roaring by at full speed for the last few miles of the journey to Cochrane. 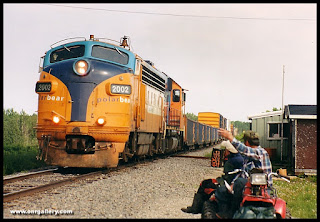 Terry, one of Moose River's residents we met during our first expedition to Mile 142 gives a wave to the arriving southbound Little Bear June 2002. If you look carefully you'll see FP7au 2002's Engineman Gary waving back. 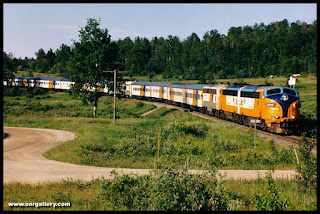 Here's a photo snapped along the Island Falls Subdivision at Mile 5 July 2002 as the Polar Bear Express journeys north 186 miles to Moosonee on the James bay coast with back to back FP7au's doing the honors.

Stay Tuned for Part Two of The Top 100 Photos of All Time Coming Soon!
Posted by Mike Robin at 5:17 PM