On Saturday April 6, 2019, I dropped in to Cochrane Shops to catch up with some of the crew who were working this chilly Saturday and embark on a little "shop talk" with some old friends like Rick, Jonathan, Chad, and Peter.

I was given the opportunity to view some of the changes that the Diesel Shops have made over the last few months which included the new Stores expansion which is now in full swing after being built in the summer of 2018 (We'll take a look at that on another post). 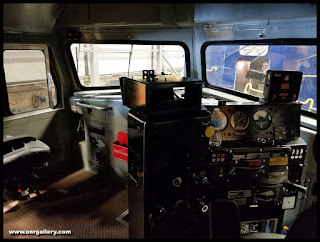 Today was all about the APCU's. After seeing that they were obviously moved from the APU Track at the Shops, I was curious as to where they could be. I was quickly told that they were safely stowed away on Track 2 where workers from NRE (National Railway Equipment, the builders of these APCU's) were working on the units.

After snapping some exterior shots of the 220 and 221 under the bright lights of the Diesel Shop, I climbed the Conductor-side ladder, said a friendly "Hello in there", and was immediately greeted by 3 American fellas hard at work with work lights, testers, and tools tackling different jobs that were required for them to perform on 221. 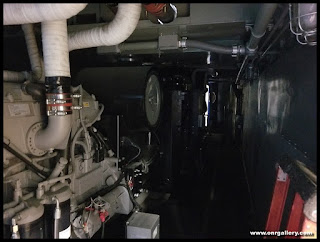 After handing out some onrgallery.com business cards, talking about these great looking former Amtrak F40PH's, and having a little chat about uniquely northern issues like how our snow will still be here in May, I expressed to them how I would be eternally grateful if I could capture a shot of the cab interior. They suggested I scoot on over to unit 220 since they haven't opened any compartments on it yet unlike the 221 which was the unit they were focusing their attention on today. I immediately thanked them and moved further back to unit 220.

Once I climbed into 220 I saw a very spacious cab which F40PH's were very widely appreciated for during their peak years in the 80's and 90's. I took a few photos then proceeded to the generator section of the unit. Once there, I noticed a ton of room on each side of the diesel generators which I know will definitely be a hit with the shops workers that will have to service these things. I snapped a relatively dark photo that, if you look carefully, will see the entrance door from the rear pilot just to show you how roomy this section actually is.

To sum up, I really can't wait to hear these units fire up for the first time and I would like to Thank everyone working the Saturday day shift at Cochrane Shops for allowing me the opportunity to spend a little time around these APCU's.