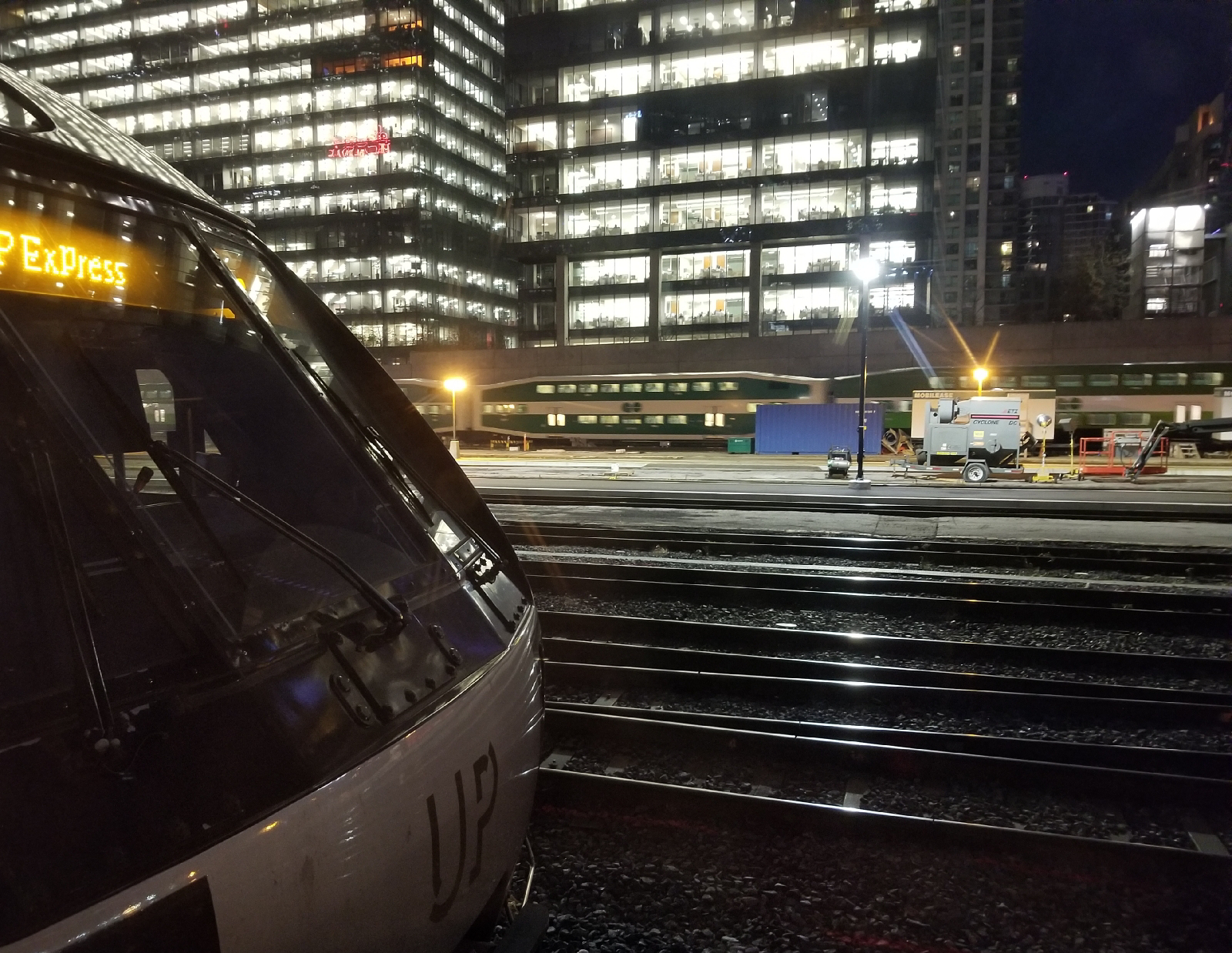 November 20, 2019. I'm in Toronto for a week of work-related training. On this beautiful Wednesday evening, after a long day's training, I elected to travel the UP Express from Toronto Pearson Airport to downtown Toronto. Now, according to the UP Express website, the trip takes 25 minutes with departures every 15 minutes. 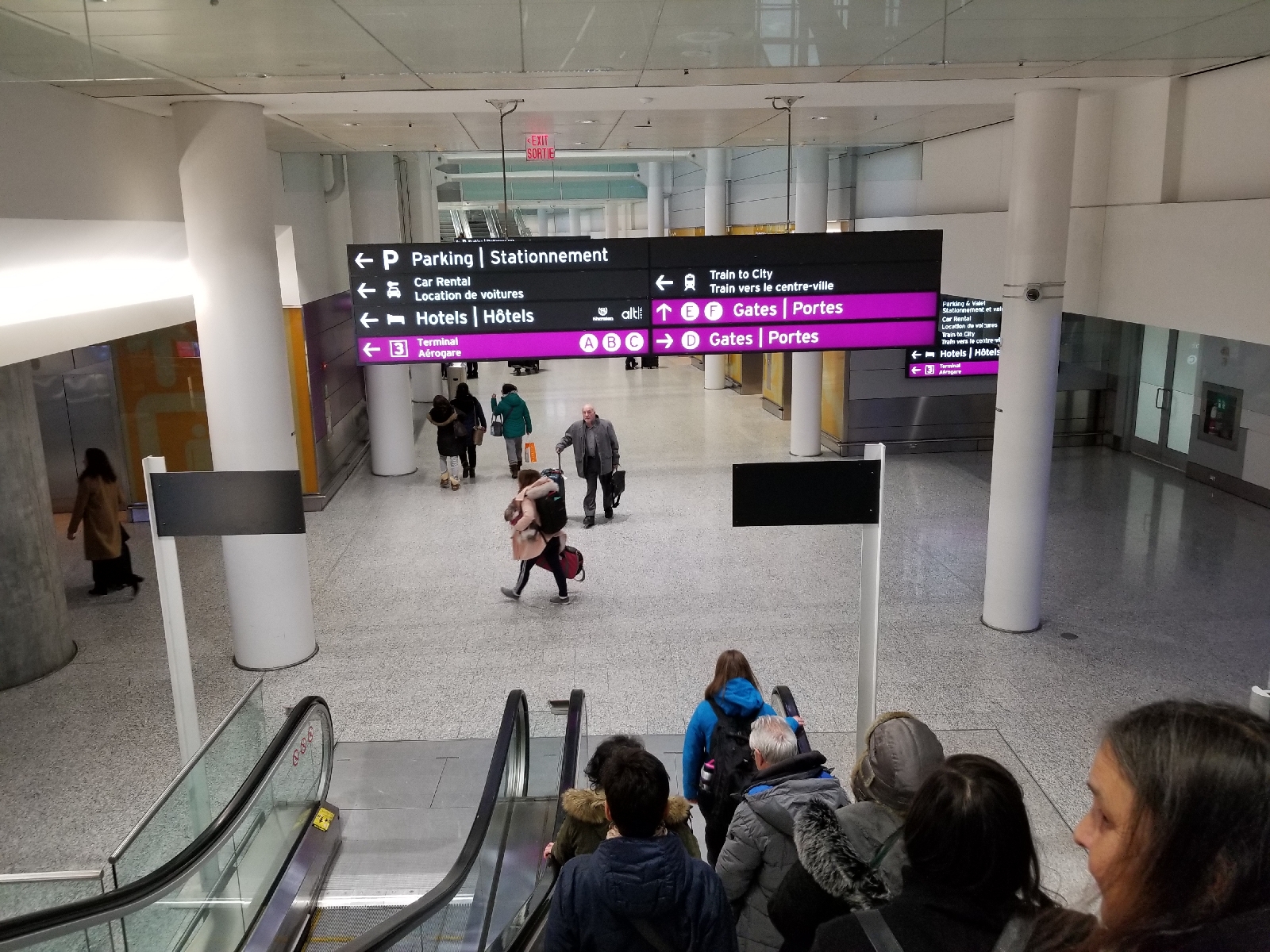 Once riding the complimentary hotel shuttle to Pearson's Terminal 1, signage clearly navigates you to the UP Express station. Be aware that the signage reads "Train to City" and not "UP Express".
It's approximately 4:45 pm so this puts us right in the middle of rush hour. This should be a very interesting trip. 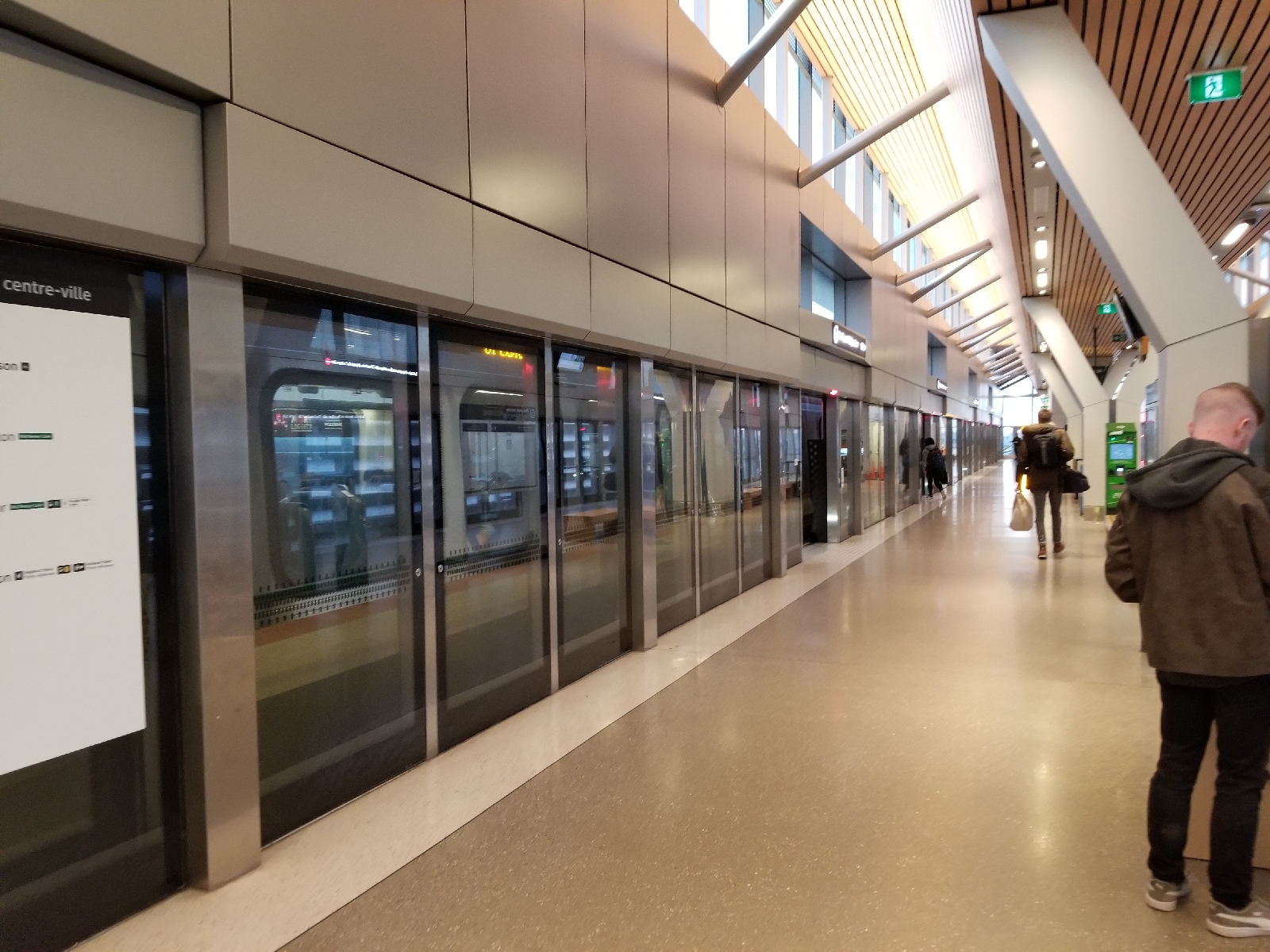 I took the liberty of downloading the UP Express App which allowed me to purchase my ticket earlier that afternoon. The app is very easy to use and provides you with a pdf file of your ticket to display to the station staff as you board the train. The photo above was taken at Pearson station. You can see our train on the other side of the window. 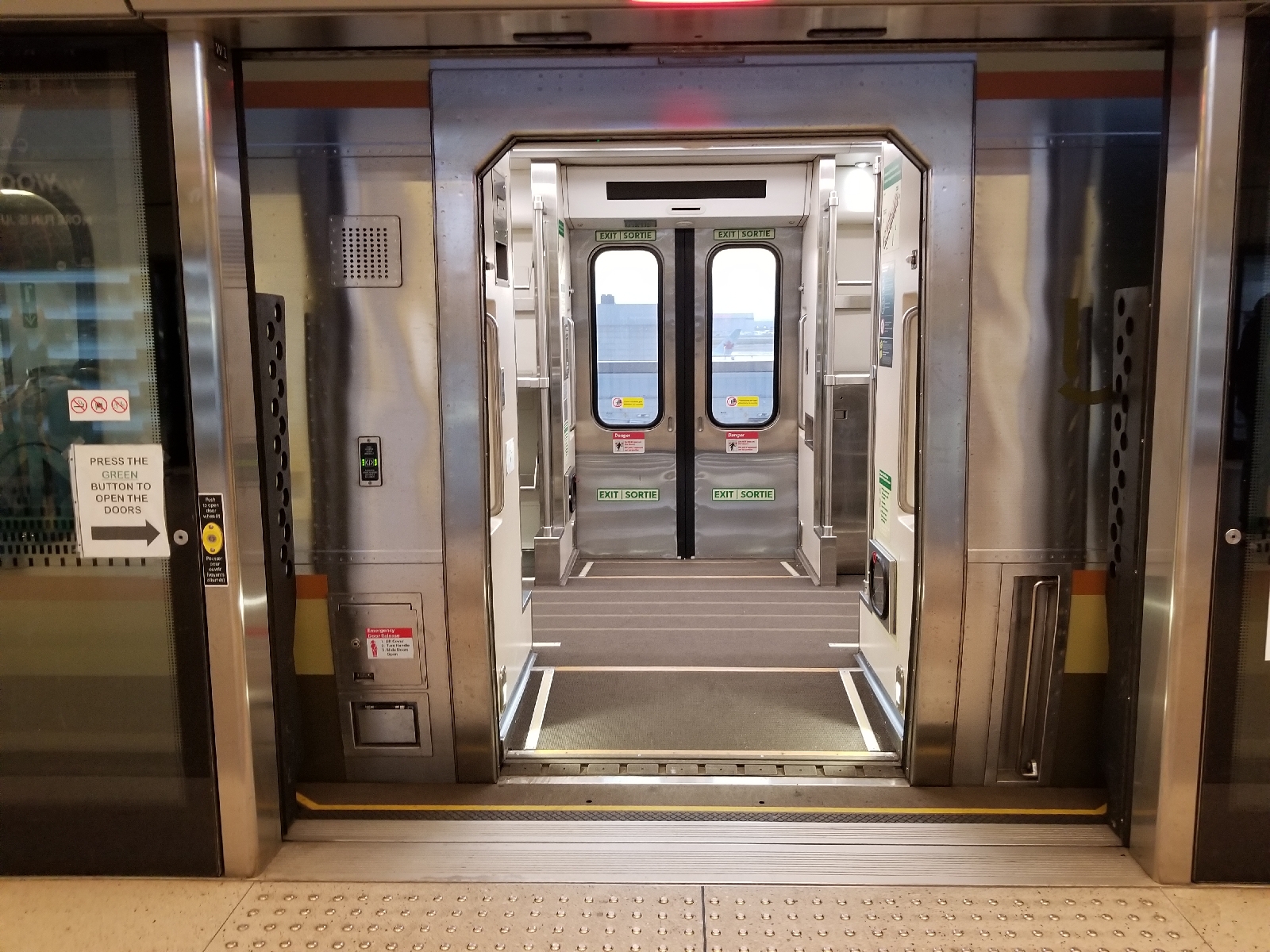 The trains are boarded through special entrances in the stations that are level to the train's floor similar to subways. No steps which is great for hauling luggage. 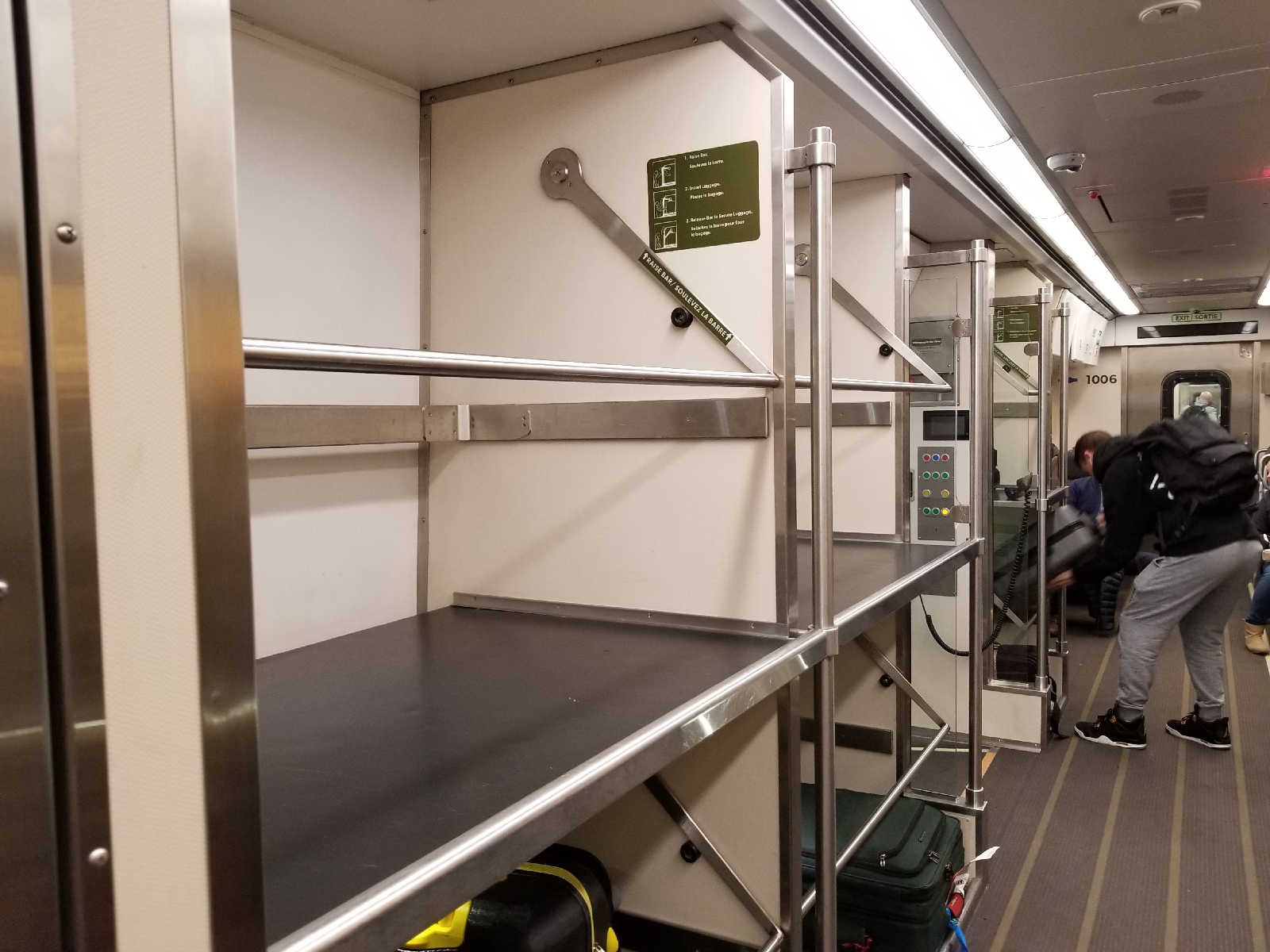 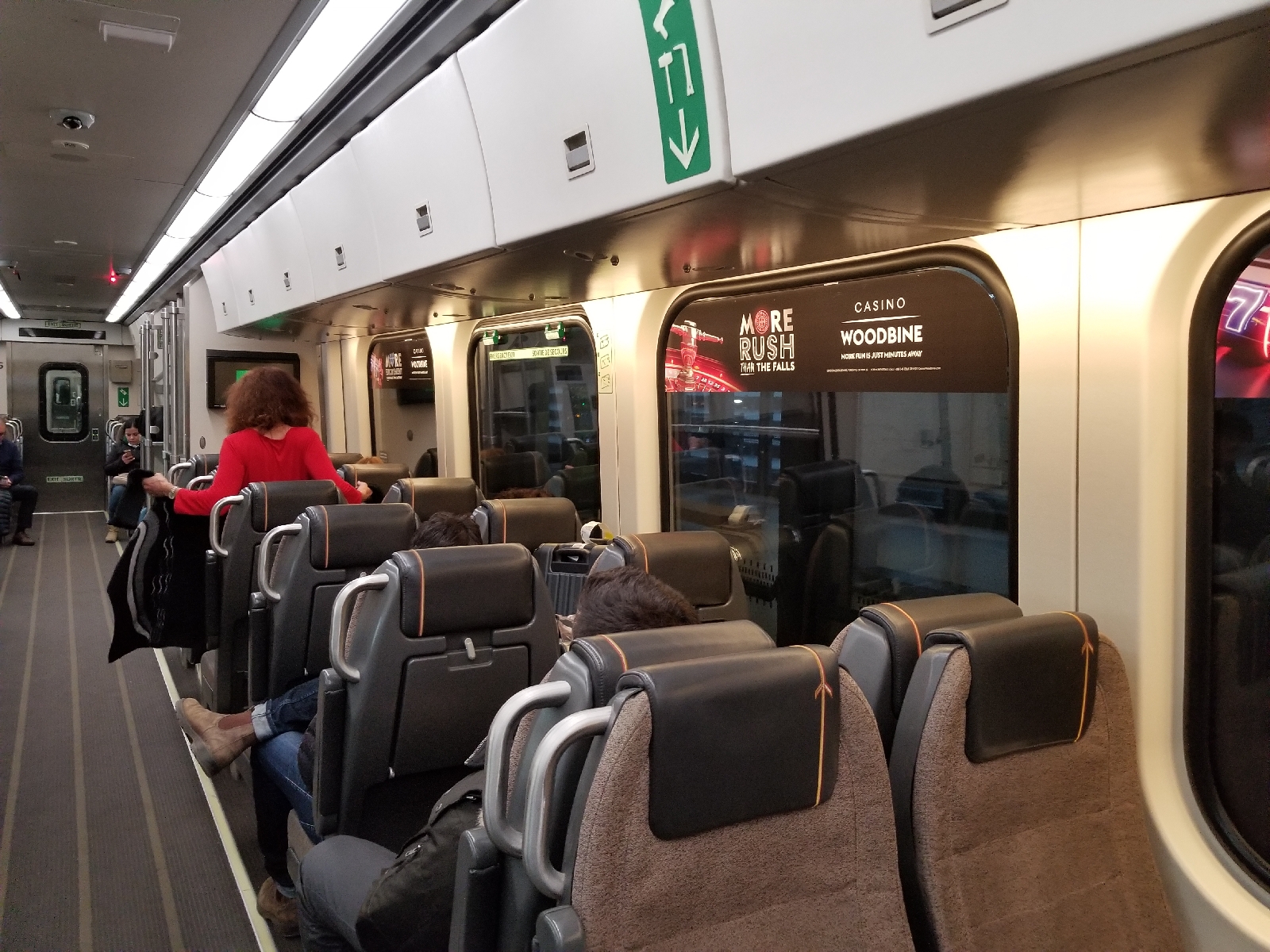 Speaking of luggage, the trains have plenty of room for luggage thanks to strategically placed racks and overhead storage for smaller bags. 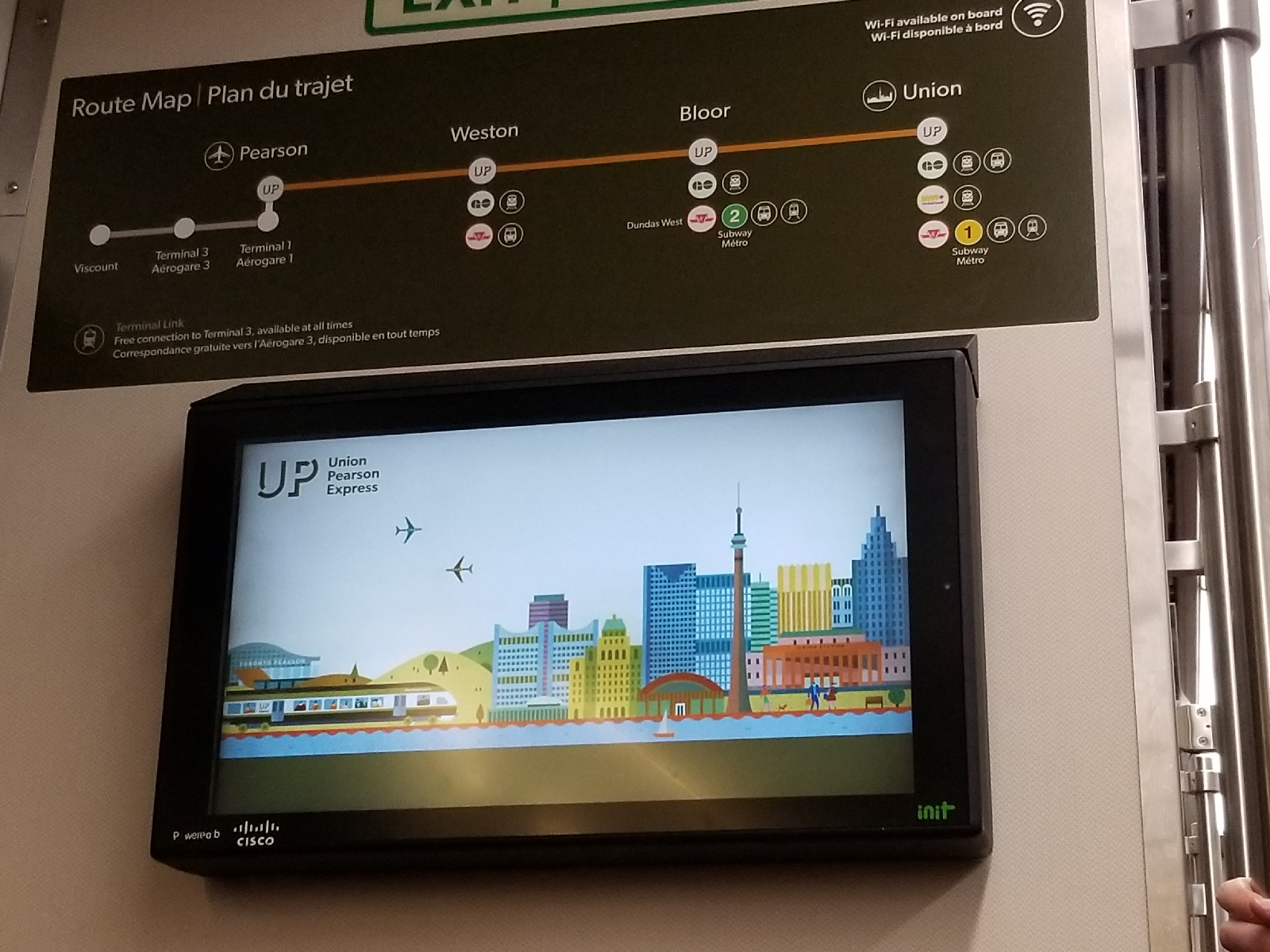 There are on board staff that ensure that tickets are purchased and seats are filled during busy times. There are plenty of announcements that are accompanied by video on screens throughout the train which include safety messages, scheduling, and upcoming stations.
I met a passenger who noticed I was logging on to the complimentary wifi which is supplied on the UP Express. She was pleasantly surprised that I was actually logged on. She then informed me that sometimes the wifi fails likely to rush hour demands. But, it worked fine for me even though there was a very full load on this trip. 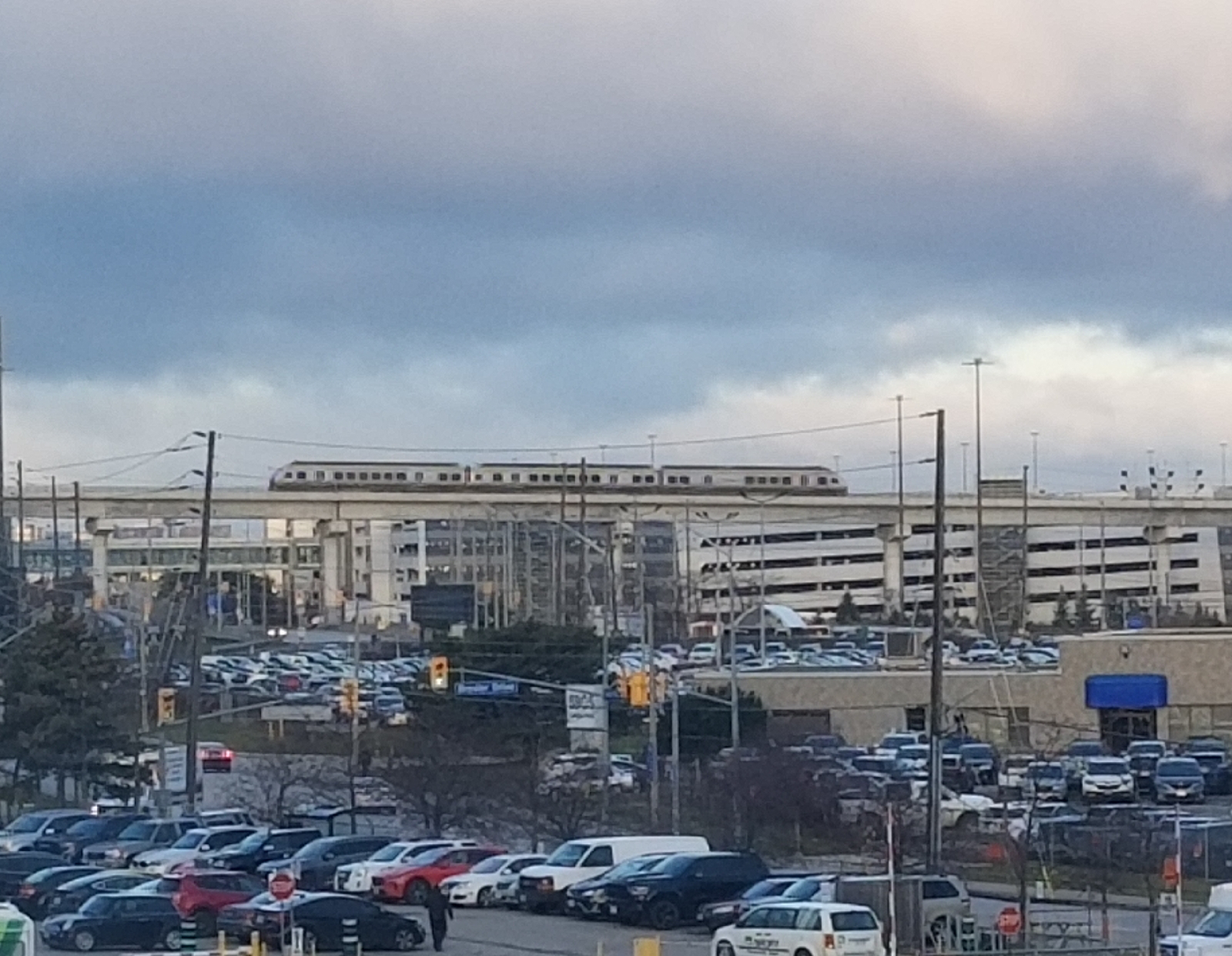 According to Wikipedia, the UP Express uses Nippon Sharyo DMU trains. The fleet consists of 18 diesel multiple unit (DMU) cars, as four three-car and three two-car sets. 7 different sets in total. Above you see an outbound from Pearson with a 3 car set on Nov. 21, 2019.
There have been some issues with the trains not being very cooperative in very cold weather, but Metrolinx is quite handy at getting passengers moving with express buses. All-in-all, all public transportation across Canada is limited by the weather, so this isn't a unique UP Express problem. 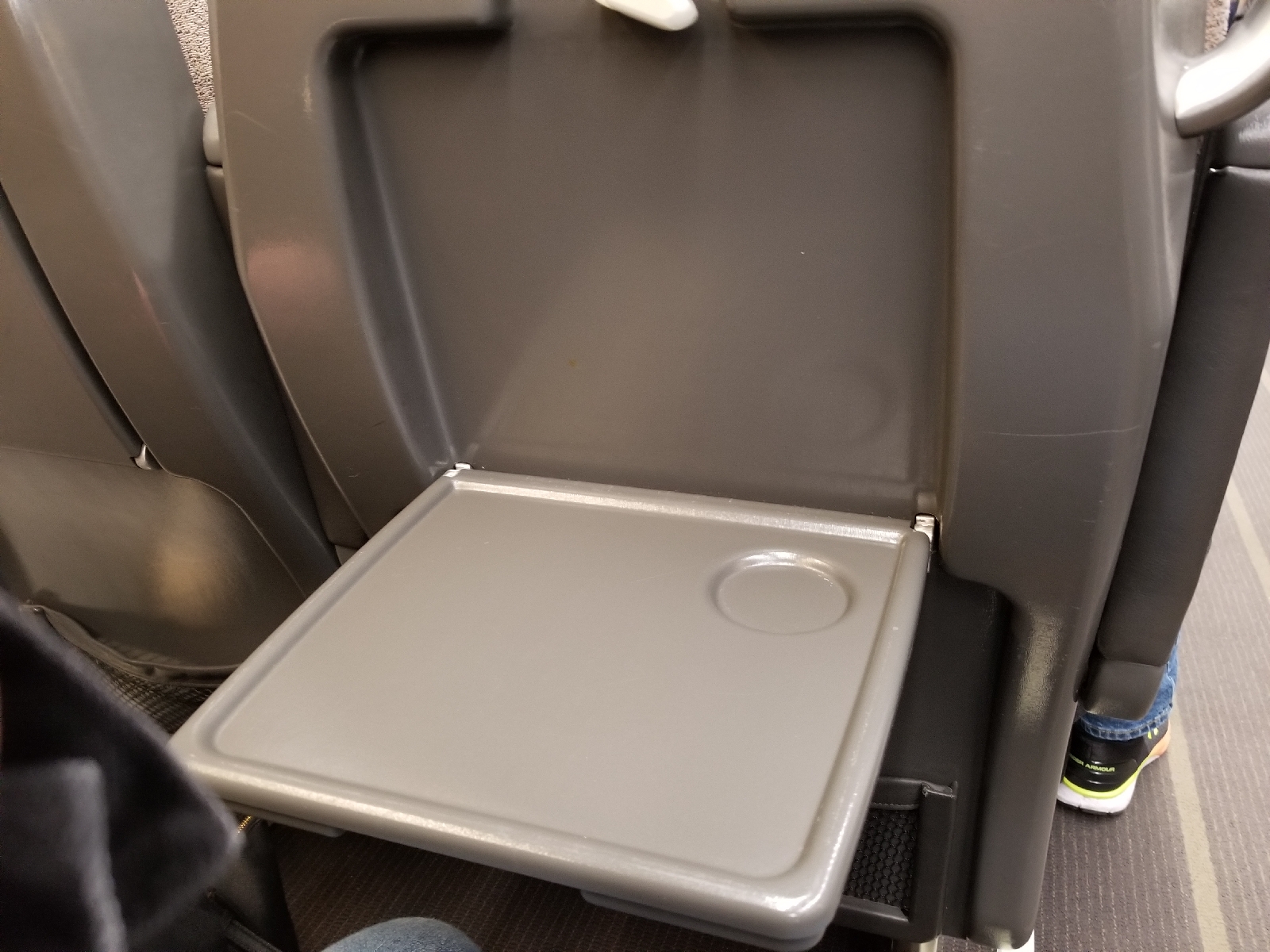 Much like an airplane, you get the fold down table which allows you to enjoy some space for a laptop, food, or a beverage that you have with you. There's no food or drinks available on the train since it is only a 25 minute ride. 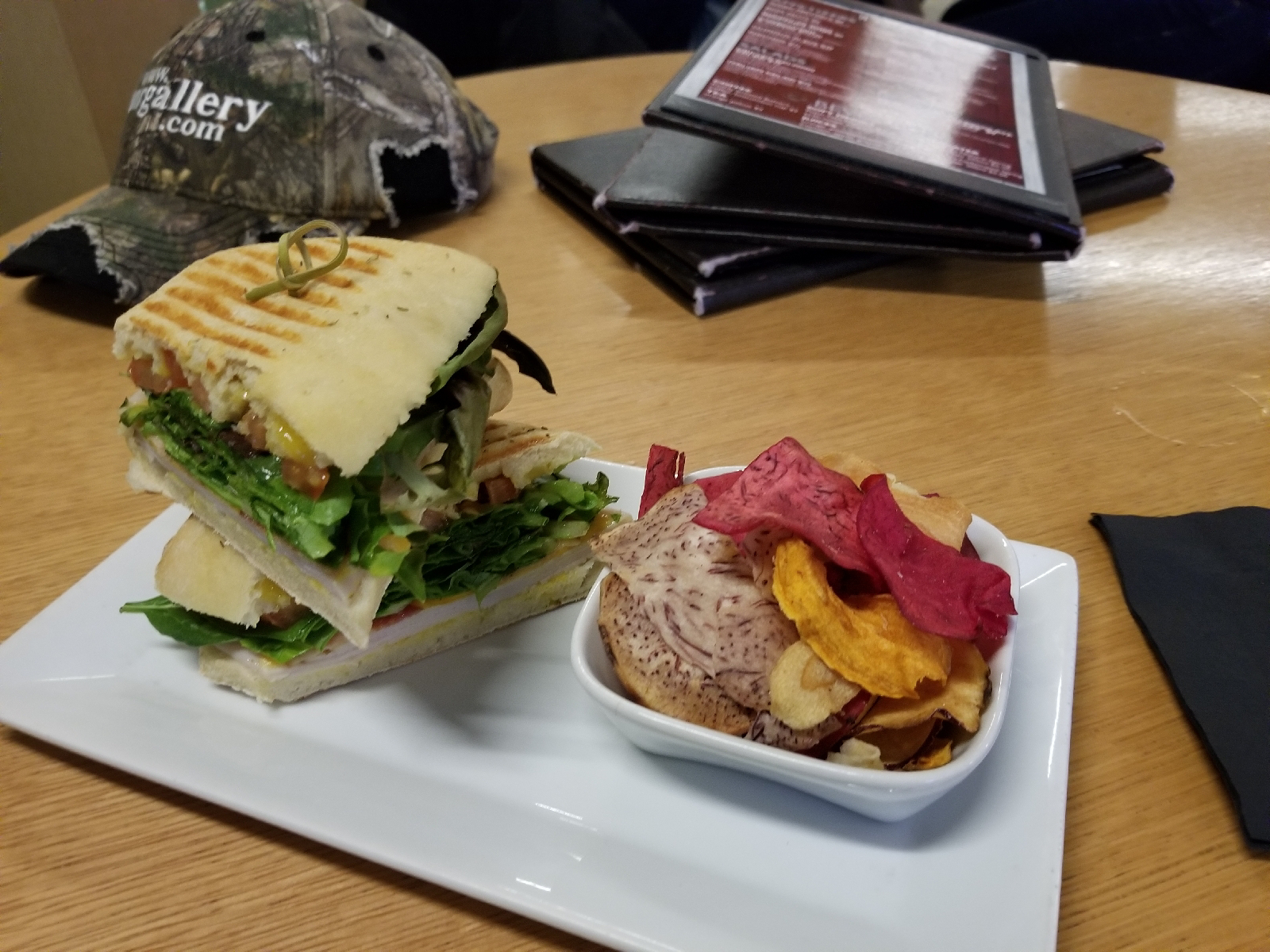 Sure enough, in 25 minutes you arrive at UP's Union stop. Wow, the classic Union Station I've known as a lad has changed dramatically. But, some of that classic Union Station feel is still preserved.
I was hungry and stumbled upon the Mill Street Brewery Restaurant right above the terminal. I thought, "Oh why not?". I found the entrance to the upstairs restaurant (a little tricky to find in rush hour crowds), and soon realized I was the oldest person in the place. But, the sandwich I ordered was quite tasty and very well priced. 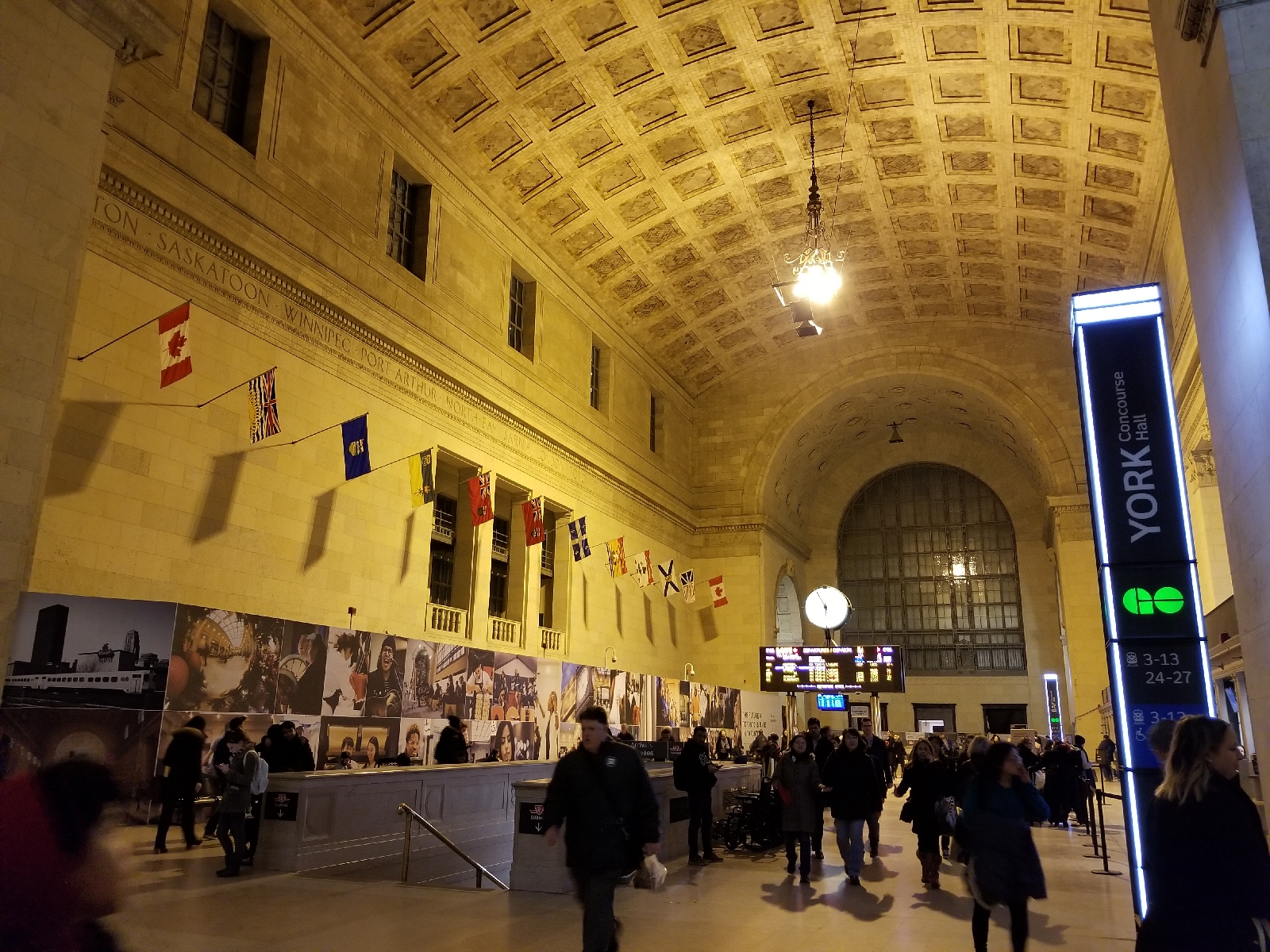 After my quick meal, I continued my stroll through the rush hour crowds to Union Station's Great Hall. It is here that the many memories of my youth catching both daytime and night time trains north to Cochrane filled my mind. It was nostalgic and sad all at the same time. But, although there is nothing left now but fond memories of passenger rail service north, I'm glad I took the opportunity to take a stroll through this majestic station. Let's hope that one day, that service will return. 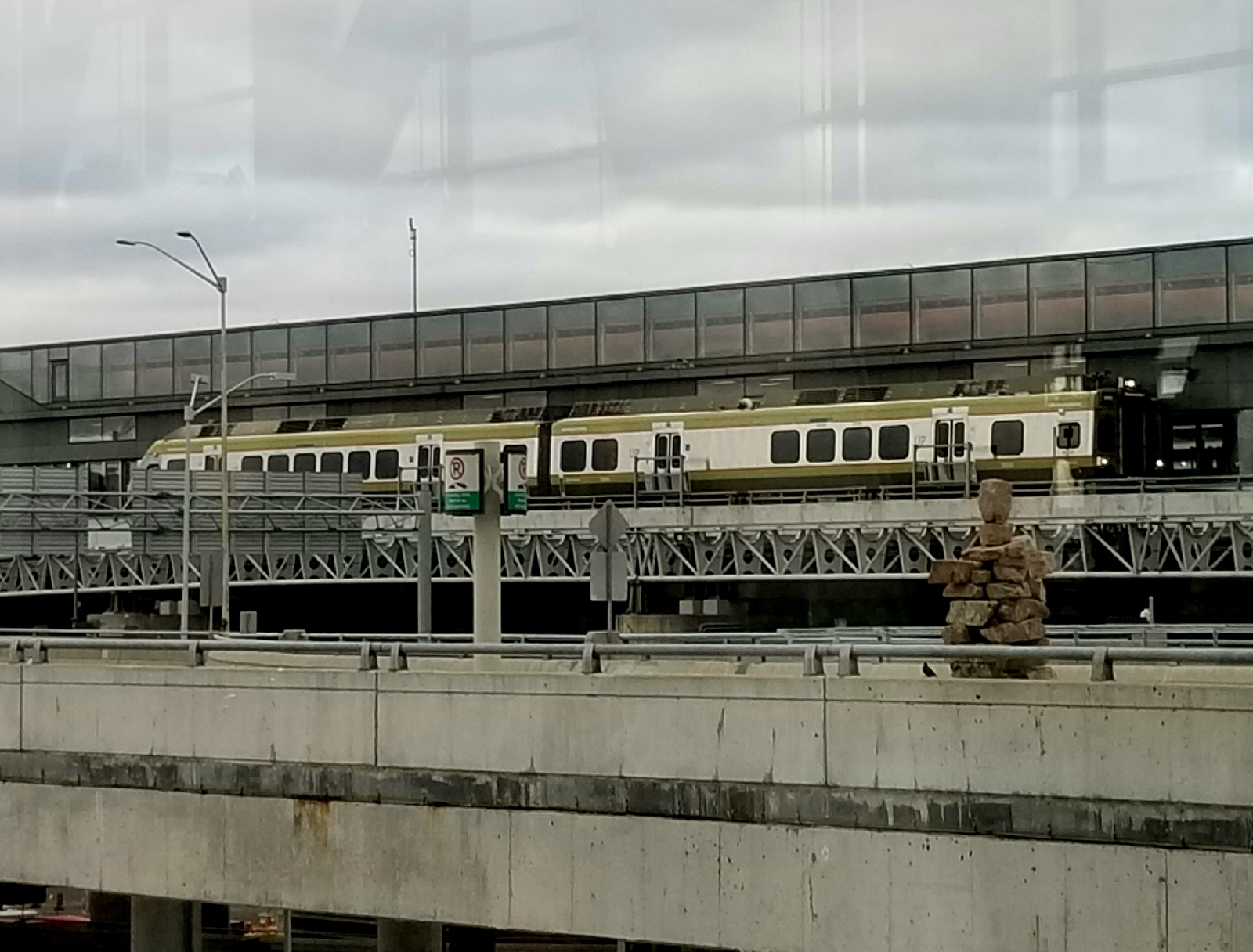 After my stroll, I decide to hop on board my return UP Express train to Pearson, which of course departs every 15 minutes from Union, and enjoyed the return trip to the airport afterwich I caught the free hotel shuttle. I was back in my hotel room by 7:30 pm.
To sum up, this is a very efficient service which finally connects the massive Pearson Airport to downtown Toronto. I had to try it out just to see how well this service is run. Considering the amounts of baggage that people generally bring when travelling, the UP Express can handle it unlike typical subways and buses. The recorded announcements are very informative and useful. The staff both onboard and off are helpful and very professional.
At the end of the day, I leave impressed.
Mike
Posted by Mike Robin at 12:34 PM